Cutest Blog on the Block

We have had a concern with Zach lately. When he is playing, he often seems like he is out of breath. His breathing just doesn't seem to match up to his level of activity anymore. He can just walk through the house and he is breathing more heavily than before. We visited the pediatrician to make sure he didn't have anything going on from when he was sick with walking pneumonia back in December --- his oxygen sats were right where they usually are in the mid 80's. Then I talked to his cardiologist. I described what is happening and asked if he was breaking out in a cold sweat or if he was panicky. I am not seeing either of those things. He said this may just be Zach's new "normal" until his next surgery. He said some children will self-limit and some will just push themselves. Zach has always played hard --- every moment of every day. He is a wild man. I guess he is just outgrowing his current capacity. Just a reminder that he is not normal. Anyone else seeing this trend with your cardiac kid? 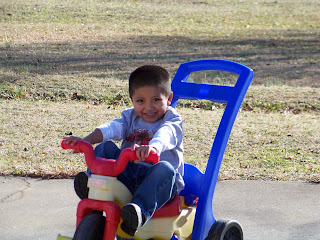 We go back to the cardiologist Feb. 5 for a checkup. I'm not sure if he will do another echo or not, but I do know he is interested in his weight.
So, MUSC finally called to schedule Zach's heart cath. It will be on Apr. 6. We will go down the night before. Last time he had a cath done (at 8 months old, before the Glenn), we stayed that night with some friends of ours in Charleston and I'm glad we did because Zach did not do well. He was crying and crying and crying, so I fed him a bottle, which he threw up later that evening. We were so afraid that he had aspirated. The friend that we were staying with actually works at MUSC. She listened to his lungs and reassured us that he was fine. I'm not sure if he was just in pain or what, but at least this time he will be able to talk to us and hopefully give us a clue about pain, hunger, etc... I still don't like the idea of taking off and driving home 4 hours with a freshly operated on cranky child. So, we might just have to find a way to stay over the night after the cath, too. Just to settle this mama's nerves. Sigh...

From the heart cath, they will be able to formulate a plan of action for the Fontan. We know it will be sometime this summer. It just depends on his weight. Last week at the pediatrician he was 31.2 lbs, so I figure he will hit the 33lb mark in 2-3 months. He has not been eating as well lately, so I am just waiting for his next growth spurt to kick in.

We appreciate your prayers for our little wild man and his heart!

I'd love to know what you think!

This blog chronicles Zach's CHD journey, which began in April of 2006, when we were just beginning the adoption process. We discovered the day after he was born that he has complex congenital heart disease: TGA, pulmonary stenosis, and single ventricle (double inlet left). He is a brave little boy who is full of life. God has blessed our family in a huge way through Zach!